On June 1st of the year 1792, the Commonwealth of Kentucky joined the United States of America. Barton 1792 Distillery released a commemorative 225th Anniversary Bourbon as a one-time release meant to be available only in Kentucky.

1792 225th Anniversary Kentucky is a distinct batch of barrels that were hand-selected especially for this commemorative release. These barrels aged for 10 years at Barton 1792 Distillery before being bottled at specifically 92.15 proof. This special proof is a nod to the year 1792 and to Kentucky being the 15th state to join the Union. The dark blue neckband on the bottle and back label is a salute to the official state seal. This is the sixth limited edition release of 1792 Bourbon expressions, the 225th Anniversary Bourbon joins previous releases of High Rye, Sweet Wheat, Port Finish, Single Barrel, and Full Proof Bourbons.

Nose: Caramel, fruit, and vanilla cream greet you out of the glass. The fruit is reminiscent of cherry or strawberry. There’s also a nice angel food cake note underneath.

Palate: First thing I get is a little caramel, brown sugar, and oak, followed by a warm, juicy red fruit similar to what I found in the 1792 Sweet Wheat but more pronounced. There is a nice burn on the tail end that carries the notes of fruit and cream into the finish.

Finish: Sweet, fruity, and oaky with a bit of caramel. The finish is medium in length and the whiskey leaves a nice “full” feeling coating the mouth. There is a little vanilla and a nice spice to finish it off. 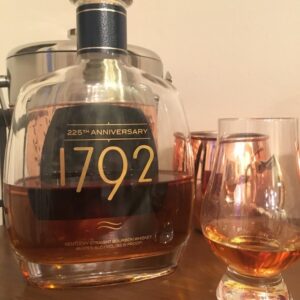 Barton 1792 Distillery was established in 1879 and denys today the oldest fully-operating Distillery in Bardstown, Kentucky. Situated in heart of bourbon country on 196 acres, the Distillery boasts 29 barrel aging warehouses, 22 other buildings including an impressive still house, and the legendary Tom Moore Spring.