Heaven\’s Door 10YO Bourbon Whiskey is produced in direct cooperation with the legendary singer-songwriter Bob Dylan. Ryan Perry and master distiller Jordan Via have developed Heaven\’s Door Whiskeys to radiate the unmistakable spirit of Bob Dylan. This is a Tennessee Bourbon. After distillation, it is filtered using the Lincoln County Process, mellowing it a little. This is done with the help of charcoal chips from old sugar maple trees. Afterwards, the Heaven\’s Door 10YO Bourbon Whiskey matures as the name already suggests for 10 years in finest barrels. 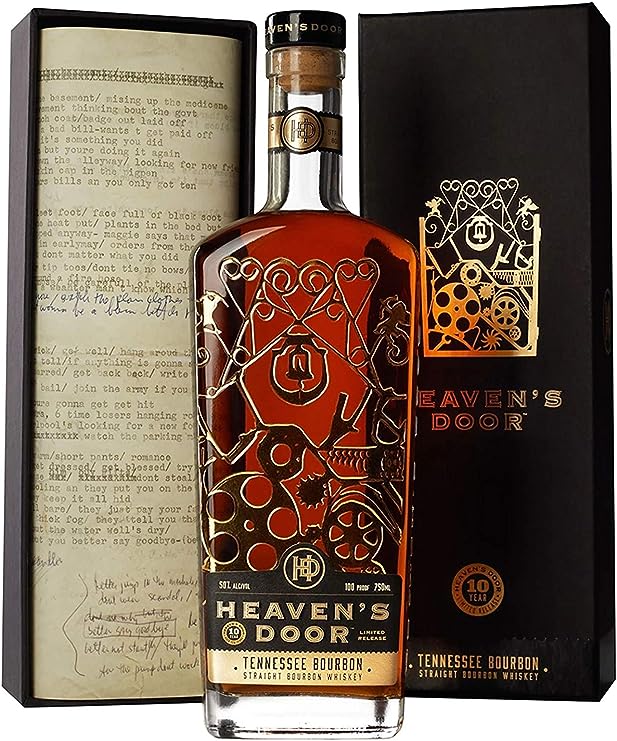 Enjoy Heaven\’s Door 10YO Bourbon Whiskey once and for all. Its aroma of whole-grain bread and warm nougat invites you to an extensive tasting. A harmony of sugared walnuts and grilled pineapple shines on the palate. The finish rounds off the taste experience perfectly with a beautiful balance of cooked peach and steeped tobacco. Even with 50% alcohol, you can enjoy Heaven\’s Door 10YO Bourbon Whiskey pure – everything else would be a crime. Cocktail luminary and author David Wondrich described Bourbon Whiskey as \”rich and chewy and dangerously drinkable.\”

The appearance of the bottle undoubtedly bears Bob Dylan\’s signature. The decoration is inspired by his craft, which he creates in the form of welding work in his studio, the Black Buffalo Ironworks. These works of art include various materials collected from all over the United States. The discreetly eccentric Bob Dylan, for example, collects chains, firearms or kitchen utensils that are finally welded together in their individual parts to create a great design.

Heaven\’s Door Spirits, created in partnership with Nobel Laureate and cultural icon Bob Dylan, launches its 10 Year Tennessee Straight Bourbon. This Limited-Release is a sumptuous whiskey from beginning to end. With exceptional depth and complexity wrought from a decade spent in toasted American oak barrels, this Limited-Release Bourbon has already received wide acclaim from the whiskey community, including an extraordinary Five Star rating from leading authority F. Paul Pacult.