Michter\’s American whiskey is an elegant bourbon with lots of depth and cascading flavors,” said Michter’s President Joseph J. Magliocco. old barrels in Michter’s rickhouses receive extra attention from the production team. “We have a protocol whereby our Master Distiller Dan McKee and I taste our most mature lots of whiskey more frequently to determine peak quality,” stated Wilson. 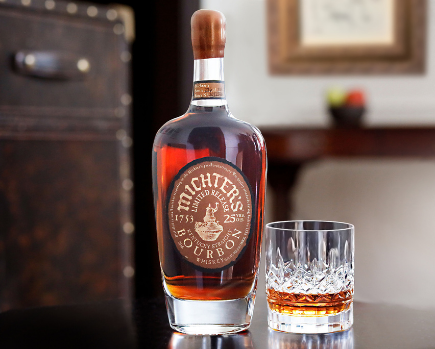 Nose: Dark amber color, along with an aroma of the coffee, vanilla beans, and smoked chips.

Palate: Notes of spices are complemented by touches of milk chocolate, citrus, molasses, and caramel.

Finish: Finish is medium-long, with touches of chewy leather, smoked dates, and oak.

Bomberger\’s Distillery, more recently Michter\’s Distillery, is a non-operating distillery facility that was, at the end of the twentieth century, believed to be the oldest remaining such building in the United States. The distillery closed in 1989.