This is a single malt from the Yoichi distillery, Nikka\’s first distillery built-in 1934. The founder Masataka Taketsuru chose Yoichi in Hokkaido because of the similar environmental conditions to Scotland, where he learned whisky making. Yoichi single malt has pleasant peaty notes and smokiness originating from the traditional direct coal-fired distillation as well as a briny hint delivered by the sea breeze during the aging process. 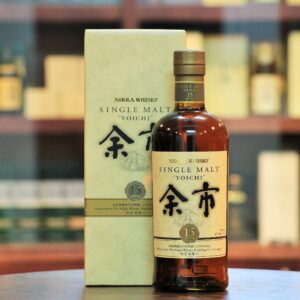 ABOUT NIKKA YOICHI
Yoichi distillery was established on the island of Hokkaido in 1934, in the small coastal fishing town of the same name. Hokkaido benefits from a climate closer to Scotland than anywhere else in Japan. Surrounded by mountains on three sides and sea on the other, the distillery is located to the west of Sapporo. Hokkaido is the only part of Japan to have local access to peat, and originally, the local peat bogs were the source of Yoichi’s subtle smoky character, gently drying the malted barley during the kilning process. Today, much of the peated malted barley used in production is imported from Scotland. Peat, coupled with the distillery’s close proximity to the ocean leaves a lasting imprint on the Yoichi products, imparting a salty and smoky character not dissimilar to the famous Scottish malts of Islay. Yoichi\’scoal-fired stills, stills which are no longer present at any distillery in Scotland, remain in use to this day and add a unique flavor to the whisky and a nod to its heritage.

Masataka Taketsuru is the father of Japanese whisky. His family owned a sake brewery that dated to 1733. Taketsuru was taught early that sake-making is a painstakingly fine art and he studied diligently, training as a chemist and preparing to carry on the family trade. However, it was Scotch whisky that captured the young man’s imagination and he decided to dedicate his life to it. In 1918, Taketsuru traveled to Scotland, where he learned the secrets of whisky-making and met his wife Rita who would be the source of his inspiration when creating whisky in Japan.

In 1920, Taketsuru returned to Japan and joined Kotobukiya, a spirits company, to produce the first Japanese whisky. It soon became apparent that to produce whisky the way he felt it should be made, he would have to become independent. In 1934, he established Nikka Whisky and built its first whisky distillery called Yoichi on the island of Hokkaido. This location was chosen as he had always considered it to be ideal for whisky production. The Yoichi distillery produces coastal and delicately peated whiskies, supported by perfectly balanced oak maturation.

Taketsuru’s growing success allowed him to establish a second distillery, Miyagikyo, in 1969 on the main island of Honshu. Miyagikyo distillery, in contrast to Yoichi, produces rich, fruity and elegant whiskies.

In the decades since, Nikka Whisky has become a fixture in Japan and throughout Europe, known for its passion for craftsmanship, quality, and flavor. Masataka Taketsuru passed away just 10 years after the construction of Miyagikyo, at the age of 85. He forever remains the founding father of Japanese whisky, and to this day, Taketsuru’s spirit continues to live on through the Nikka blending team, whose quest for excellence in Nikka whiskies perpetuates his memory.

On 2 July 2014, The Nikka Whisky Co celebrated its 80th anniversary and today its whiskies are multi-award winning, having won more than 30 leading industry awards in recent years.